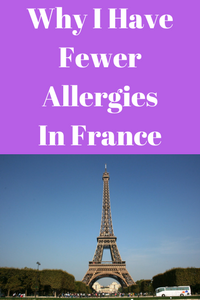 Home   »  Allergy Remedies   »   Why I Have Fewer Allergies In France

Why I Have Fewer Allergies In France

As some of you may know if you’ve read my about page or have followed me in other places online, I’ve spent quite a bit of time in France. While it’s been several years since my last trip to France, I have noticed that in general, I have fewer allergies in France.  Why? While I’m not sure why all the reasons are that I have fewer allergies in France, here are some of the reasons why I believe this is true. By the way, no I’m not planning to move to France, instead, this is meant as an interesting essay of sorts on why I believe we have more allergies in the United States.

Have you noticed that you have fewer allergies when visiting or living in a different state or country than your home state or country? Tell me about it in the comments.