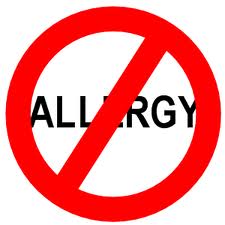 For years in fact as far back as I can remember even to elementary school I had clogged sinuses, regular sinus infections, periodic headaches that seemed to come from nowhere, bouts of insomnia, stomach aches, and almost constant lower back pain that would improve for up to a week after a chiropractic adjustment, and regular sore throats that were my only symptom of an illness. It wasn’t until about a year ago that I started to realize that I might have food allergies. Do you have any of these symptoms too? If so, you might have food allergies. Many people including doctors falsely believe that food allergies have to be life threatening or cause you to end up in the hospital in order to be real, yet, this is far from the truth as I have discovered during the past year. In fact, now that I am aware of all of the symptoms of a food allergy, I think I’ve probably been suffering with them for years and most if not all of my pains and other health issues that have plagued me for years are the results of food allergies.

Yet after over five years of working with a chiropractic office of three chiropractors, two different acupuncturists over the course of a few years, an ENT (ear, nose and throat doctor), and numerous doctors not one of these health care professionals ever mentioned to me that my health issues might be caused by a food allergy. So why? Well as I have discovered too many health care professionals no mater how much training they may have and how great they may be simply do not know what all of the symptoms of a food allergy are and some even don’t believe that it’s possible to have food allergies unless you end up in the hospital after eating a certain food.

So here are some common things that your doctor is not telling you about food allergies that can and do cause major problems for the health of many people.

1. Supposed seasonal allergies that aren’t really seasonal as they seem to last all year and frequent sinus infections are usually warning signs of a food allergy and should be treated as such.

2. A sore throat that doesn’t also have a cough, fever or other symptoms is probably a food allergy.

3. Constant stomach aches or other moderate to severe stomach conditions are usually caused by or increased by food allergies.

4. One man’s food is another man’s poison. Certain foods may be great for most people but for some people they can cause major health issues and should be avoided.

5. Covering up and suppressing your allergy symptoms with drugs is the worst thing you can do. It is much better to avoid the food or to eat it only sparingly rather than eating it all the time, getting an allergic reaction and using a drug to stop it.

6. If you’ve already explored all your other options as to why you are sick, and still can’t figure out why, then a food allergy needs to be considered.

7. Chiropractic and acupuncture are two of the best therapies for helping you control and over time reverse some of your food allergies and food allergy symptoms.

Do you have food allergies that aren’t life threatening but yet still cause you major health issues? What else do you think doctors aren’t telling people?