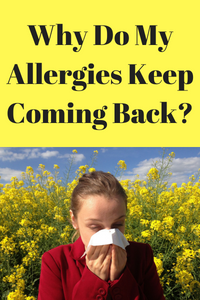 Do you struggle with allergies that keep coming back? So did I for years. In fact you can read my allergies story here. I also invite you to keep reading as I share with you some ideas and reasons why your allergies keep coming back.

If you have allergies that keep coming back no matter what you do and you can’t seem to pinpoint your allergies to a specific reason or cause, then here are some suggestions as to what to do next to finally get some relief.

2. Start taking a daily probiotic. Probiotics can help balance your stomach bacteria and can help in other ways. Learn more about the questions to ask before buying a probiotic here.

3. Take a serious look at whether or not you have leaky gut. A leaky gut can cause all kinds of problems including allergies.

4. Read the book- the Diet Cure for some great ideas.

What questions do you have? Ask them in the comments below. I also offer free wellness consultations that you can request below so I can help you more personally. Above all know that it is possible to get rid of your allergies and to stop your allergies from coming back over and over again. 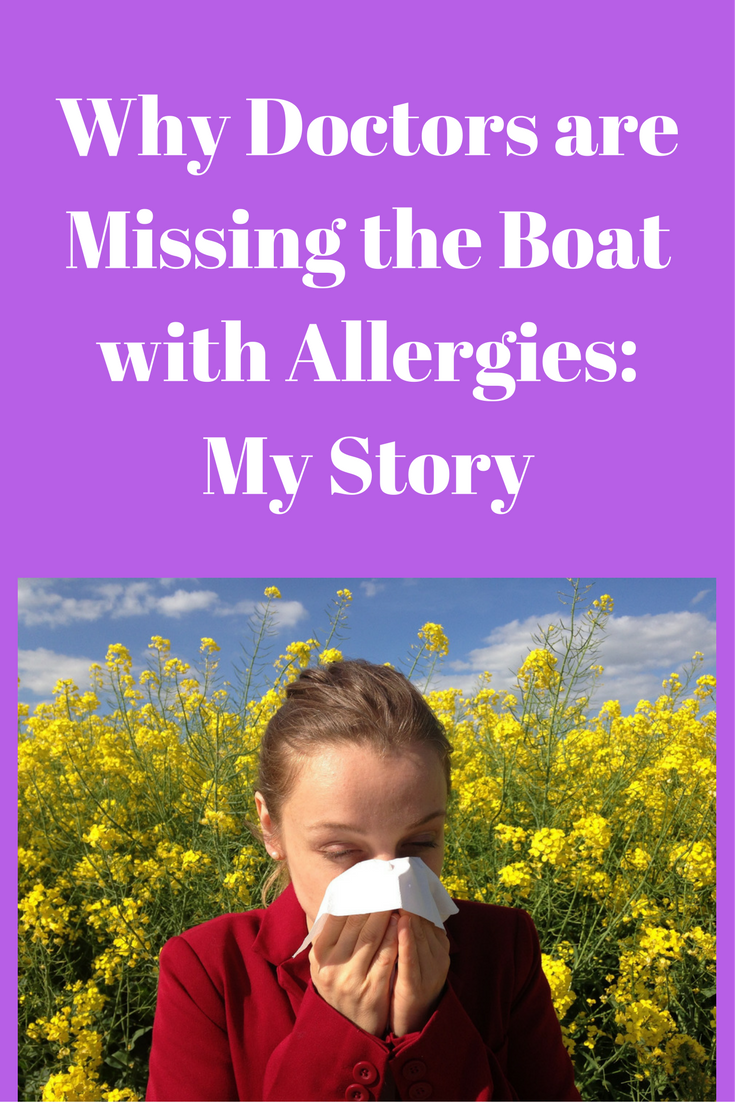 For as long as I can remember I have had allergies. Sometimes they were minor and I could live with them, othertimes they were so bad I thought I was going to die and sometimes my allergies seemed like a never ending cold. Between the sniffles, sore throats, clogged up nose, cough and runny eyes I seemed to always be sick.

So what did I do? In a word- everything. I’m not kidding. You name it I tried it. I tried every drug on the market for allergies and asthma, both over the counter and prescription. I used neti pots. I used saline solutions and nose drops. I used a variety of herbs. I used various vitamins and supplements. I tried cleaning out my ears. I went to one doctor and then I went to another one and another and in all I probably went to at least 10 different doctors and health care specialists of one kind or another over the course of about 20 years. While some of these things helped a little, nothing ever really cleared up my allergies. In short, I was still miserable. Then I discovered essential oils in 2007 and while those worked better than most things I had tried, I felt like I was still covering up my seasonal and environmental threats rather than getting to the root cause and I was still sick.

In all, I took over the counter allergy drugs every day for over 20 years. It didn’t mater what they weather was like, the ground could be covered in snow and I was still sneezing like I had hay fever even with no trees or leaves in sight.

At a couple of my doctors appointments I suggested to my doctors that I might have a food allergy but was told that I was fine. “It’s not food, it’s just environmental, it’s the bad air in Utah, everyone has allergies.” I was told.

So I believed them, kind of. However, in the back of my mind, I still continued to wonder if certain foods weren’t at the root cause. At that time I was a broke college student and my insurance wouldn’t cover any functional medicine testing, so I just continued to use the remedies I had without the kind of relief I was hoping for.

Then in 2005 I left to go to school in Indiana for two years. At last I was out of the muck and dirty air and the trees and plants that bloom each Spring and Fall and leave their pollen everywhere. Now maybe I would finally get some relief. With some excitement and some skepticism, I looked forward to finding out if I would finally be allergy free.

However, within a few weeks of my arrival in Indiana, I was left yet again with allergies and more allergies. In fact, not only did they not improve, but they seemed at times to be worse.

Ugh. I was really getting frustrated now.
Fast forward to 2007 and I was back in Utah and still suffering. I’d always had a hard time blowing my nose since I was younger and my dad had had surgery for a deviated septum in the nose. I had a new job with insurance and so I make an appointment with an ENT to see if surgery would help. He said it would and so I had the surgery. While it did help some and I was able to blow my nose more, I still continued to struggle with allergies, frequent sinus infections and my nose still didn’t seem as clear as it should be for someone who had had the surgery I had had.

Fast forward four more years and I began to break out all over with rashes. These rashes seemed to come from no where and at this point, I really began to question what I had been told during the past 30 years about food allergies. I had better health insurance and more income and so I booked an appointment at an integrative medicine clinic that also offered acupuncture and eastern medicine. They specialized in food allergies and autoimmune conditions.

The first thing they recommended was a food allergy and food sensitivities panel. I did the blood test and when the results came back I was shocked. Severe allergies to wheat and milk and varying degrees of food sensitivities to about 40 other foods. Many of these were things I was eating on a regular basis and had no idea. While I was shocked, I was also rather upset and annoyed. How come after all these years, no one ever told me, that the foods I was eating were at the cause of many of my allergies?

At the direction of my new doctors’ office, I did an elimination diet with all the foods on my list and I gave up wheat and milk. I also did 6 months of extensive acupuncture and Chinese herbal treatments.

Fast forward to almost 4 years later and my allergies are almost 90% gone. Yep, that’s right, after almost 30 years of non-stop allergies, I almost never get them anymore and if I do, I know it’s because I’ve eaten too much of something that I have a sensitivity to and I know how to fix it.

Why and How did this happen? Why did I suffer for all these years and try all these allergy medications and remedies with little to no relief, only to find out that I had food allergies and food sensitivities?

There are a variety of reasons but they really boil down to these:

Food sensitivities vs Food allergies are not well understood by most doctors including even many holistic providers. So just because you don’t have an “allergy” as determined by a traditional allergy test, does not mean that the food in question, isn’t bothering you. Any food can cause problems at any time and yes the symptoms can be similar to those caused by seasonal allergies and or hay fever.

While I’m not happy about what happened to me and I’m frustrated by all the years of allergies, pill popping and still not feeling well, my hope is that at least my story can help others to avoid years of suffering and hassles.

Need help? Schedule a time to chat with me. 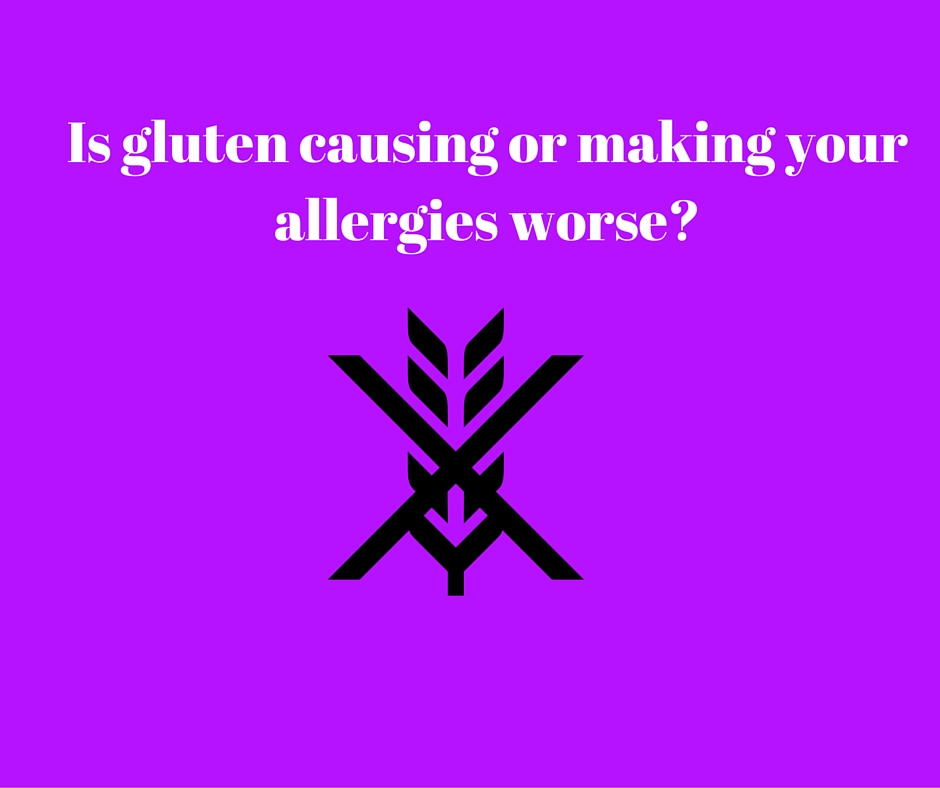 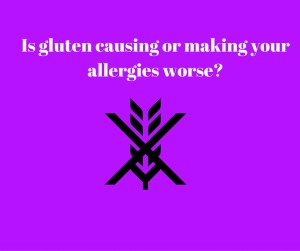 Is gluten causing or making your allergies worse? What? Yes, the reality and truth about gluten and allergies is that if you have really bad allergies then gluten may be causing them. While gluten may or may not be the only reason your allergies are out of control, it is certainly worth looking into the connection between gluten and allergies. Personally I had horrible so called “seasonal” allergies that never went away and I tried everything you can think of both over the counter, prescription, holistic, alternative you name it I tried it. My allergies never really cleared up until I went gluten free. Sure the other allergy remedies that I tried helped but they didn’t get to the root of the problem and I still had sinuses that were constantly stuffed up, eyes that watered a lot, etc.

That said, here are some articles and other support materials to help you really understand the truth about gluten and allergies.

1. Gluten is a known inflammatory. See my article about the connection between inflammation and allergies. How an anti-inflammatory diet can help with allergies. Also see this article on Why You Should Ditch Gluten Now If You Have an Autoimmune Disease. While having allergies does not necessarily mean that you have an auto-immune disease, if your allergies are severe, then there is a good chance that you do.

2. Gluten is one of the top 8 allergens that are known to cause problems in a lot of people. [Even if you have had a blood test or a skin prick test that was negative, this does not mean that you are not sensitive to gluten and yes gluten can still be one factor for really bad allergies.]

3. Gluten causes what is known as leaky gut and leaky gut is proven to make allergies worse.

Here is a video with even more information about gluten sensitivity and gluten and allergies.